We left Windhoek, bound for the bush in our chariot, a Cessna 310. I was exhilarated to be going out of town, especially since we were headed to 4 star safari lodges in the middle of the wilderness.

Now, we had never been on a luxury safari. If you’ve never been on one either, allow me to let you in on a little secret….it is AMAZING.

THE DUNES OF SOSSUSVLEI

We arrived at the Geluk airstrip, a rocky, sandy landing area near Sossusvlei in the early afternoon. Hopping out of the plane, I immediately felt the liquid in my body being sucked out. It was hot. In fact, we were told later that it was 43 C (that’s 109 F!).

As you may recall the last time John and I were in Sossusvlei it was my birthday. It’s also where we got engaged, so it has a special place in our hearts.

After twenty minute drive in the Land Rover, we pulled up at Kulala Desert Lodge. Overlooking a dry riverbed, the lodge has a spectacular view of the rust red sand dunes in the distance. Stepping down out of the Landie, we were offered a cold towel and a small glass of juice. They do this every time you come back to the lodge! Hey, we’re new to this whole “luxury traveling” thing.

We lunched at the main lodge before heading down to our room. The rooms at KDL are half tent and half adobe, each one boasting a rooftop platform. If you chose to sleep outside, you get a front row view of the stunning night sky. Obviously, we opted for this and when we returned later, our rooftop bed was all made up.

Our guide, Immanuel was an eager chap, fresh out of guide school. He took us out on an evening game drive that was mostly geared towards flora and geology. I didn’t know what to expect of the guides when we booked the trip, and I must say I was pleasantly surprised by the amount of information we received from all of our guides.

Immanuel settled on the perfect sundowner spot, high up on a rock outcropping overlooking the dune corridor.  We sipped chilled white wine and gin and tonics while we watched the sun go down and the bright moon rise from the horizon.

The next morning, Ims woke us up at 5 AM for our morning drive to the dunes. John decided that we should try to conquer Big Daddy again. So, we did. It only took us about an hour to slog through the hot sand to the summit 3,000 feet above. We celebrated by running in giant leaps all the way down.

The lovely staff at KDL prepared a private, candlelit dinner for us on our last night. They knew we were celebrating our honeymoon, which made it very special.

THE RHINOS IN DAMARALAND

The next day, we set out for the north. After a scenic flight along the coast in our own Cessna 406, we quickly boarded a Caravan and made the bumpy crossing over the Etendeka Mountains to Desert Rhino Camp. The landscape is surprisingly desolate looking, with sandstone and granite peaks popping up in between rolling scrublands. Our personal guide, Gift, met us at the airstrip and brought us via Land Rover along a bumpy track to the camp.

People go to Rhino Camp for the chance to track and see wild rhinos. This is an amazing experience because black rhinos are extremely endangered due to poaching.

There are only eight rooms available at this exclusive and secluded camp. The main tent is much more rustic, but it’s decorated with all of the flair of an old timey safari…leather chairs, wooden trunks, and Persian rugs on the floor.  As we checked in, we surveyed our surroundings and noticed the festive Christmas tree made of dry elephant poop.

That afternoon, we had the camp to ourselves. The guests who were supposed to stay there decided to leave because they don’t have WiFi. I wonder if they realized what they were signing up for when they booked the trip…

After a short evening drive, Gift set up our sundowner on a wide plain strewn with red basalt stones. I have to say that a personal guide really makes the whole camp experience that much more intimate. We returned to camp to find a romantic candlelit dinner set up just for the two of us. We enjoyed the tranquility of our little table under the roof of the expansive sky.

The next morning we left the camp at 6, ready to find some rhinos.  The trackers were already well on their way and Gift was communicating with them via hand held radio. We would be following the trackers until they found a rhino.

We drove through valleys and between massive red mountains for about two hours. It’s strange, you wouldn’t think that there is much life in such a dry area, but if you look hard enough, you find it- oryx, guinea fowl, mice, jackals, elephants and even giraffes.  Our radio was silent for a long time. We hadn’t heard anything back from the trackers. But, then we finally got word. The trackers found fresh tracks. We met up with them on top of a ridge, overlooking a wide grassy valley. These guys reminded me a lot of cowboys in the American west, out there in the wilderness. The team of four pointed to the horizon and consulted each other, taking turns with the field glasses. They’d spotted it.

It was time to find a place for our vehicles and continue on foot. We began walking in single file and everyone fell silent. Waving us forward, Denzel gathered us in the shade of a massive milk bush tree and pointed around the side.

The trackers told us earlier that Ben had been known to charge people and become aggressive.

Denzel led us out from behind the safety of the milk bush, allowing us to fully observe the rhino and take some photos. Ben was enormous. We think he was well over 3,000 pounds. Having recently had his horns removed, I’m sure he was confused and mildly upset. To prove his reputation, Ben looked over and squared up with us. Then, he began to march in our direction. Denzel quickly led us back, then back some more, then back even farther. We walked away until Ben stopped coming forward. My heart hammered inside my chest as I let out the breath I’d been holding. I had full faith in our guides and trackers, but in that moment I couldn’t help the adrenaline rush that filled my body.

It was hard to top the excitement of the morning. But, later that evening we were treated to a game drive where we observed a den of hyenas from about 20 feet away. The hyenas had feasted the night before, so they were hugely fat and content to stare at us. After that we got to see a group of two-week old jackal puppies, romping about in the open plain. I still don’t understand why they wouldn’t let me get out of the Land Rover and stash one in my bag.

THE LANDSCAPE AT DORO !NAWAS

A twenty minute flight brought us to Doro !Nawas the next afternoon. After a few hitches with the check in process, we headed out for an evening drive to see the Twefelfontein rock engravings. A UNESCO World Heritage Site, these rock engravings date from about 1,500 – 2,000 years ago. The San (bush) people created the engravings to communicate with each other, carving frescoes of wildlife and watering holes. There are even depictions of animals undergoing spiritual transformations with humans. The whole thing was remarkable.

The next morning, we went to the Petrified Forest. OK, I know it might sound kind of boring. But, we really like to nerd out on rocks! Namibia’s Petrified Forest has been so well preserved partly due to the dry climate and lack of population density. These trees looked like real living trees, with bark texture and branch nodes and even growth rings. They looked like rocks that had been cast out of a tree mold. Apparently, the trees came from up north in the Congo and were carried down south in a giant flood…260 – 280 MILLION years ago. So cool!

Later that afternoon, we decided to go find some desert elephants. We drove for about forty minutes, fishtailing in the sandy bottom of a dry riverbed. We could see evidence of the elephants presence everywhere—huge piles of dung, tracks, and mutilated foliage. We were lucky enough to come upon a few groups of elephants, including big female and her two calves. Just before we headed back to camp, we stopped to observe a young bull. This guy didn’t like what we had going on, so he marched towards the Land Rover, raised his ears, stood in front of us and trumpeted a loud warning. I may or may not have pooped my pants.

Each evening at Doro !Nawas, we rolled our bed out onto our private patio, where we slept under the moon and stars. The rooms here are beautifully done, and I have to say this was one of the highlights of staying at this camp.

We hopped a short flight on the Caravan back to Windhoek the next day, and just like that, we left the bush behind. Although it’s always nice to be home, I long for those still evenings, where we can fall asleep to the sounds of insects and birds.

Naturally, we took a bazillion photos. Here are our favorites! 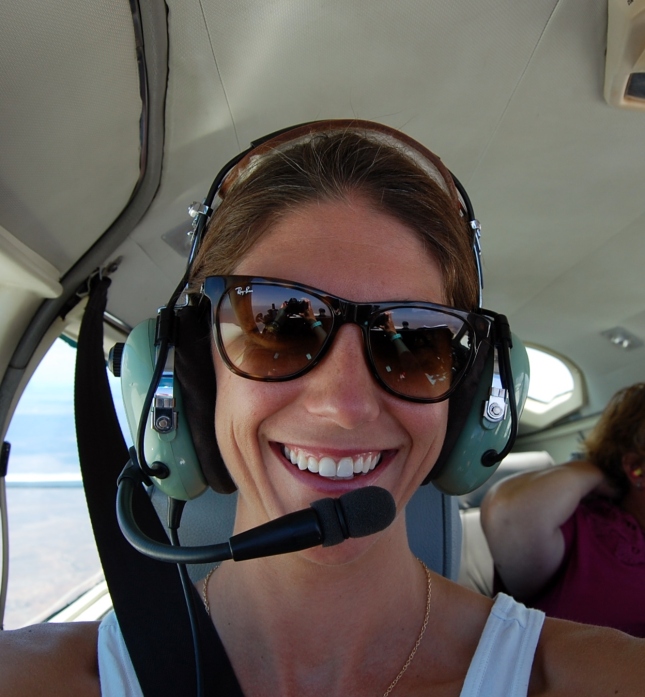 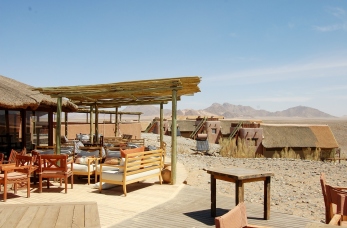 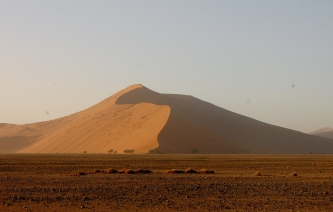 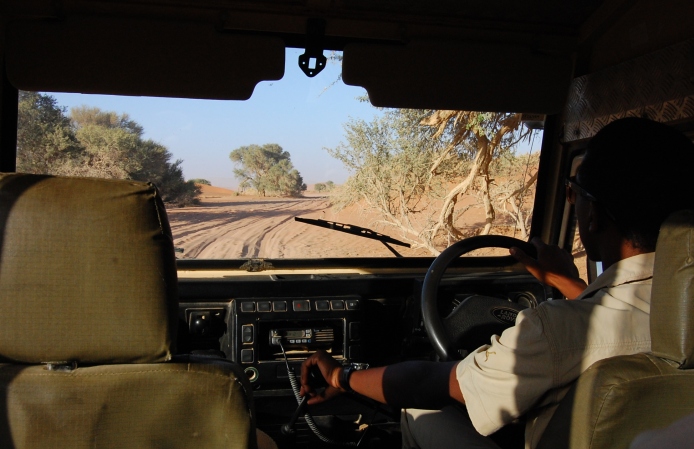 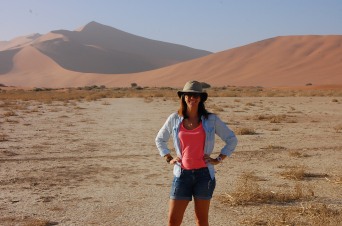 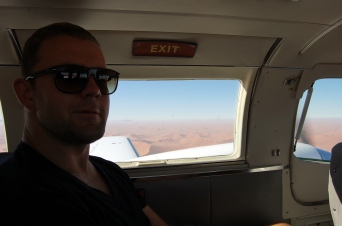 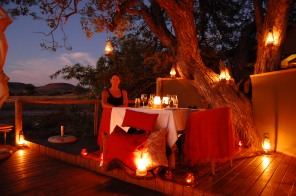 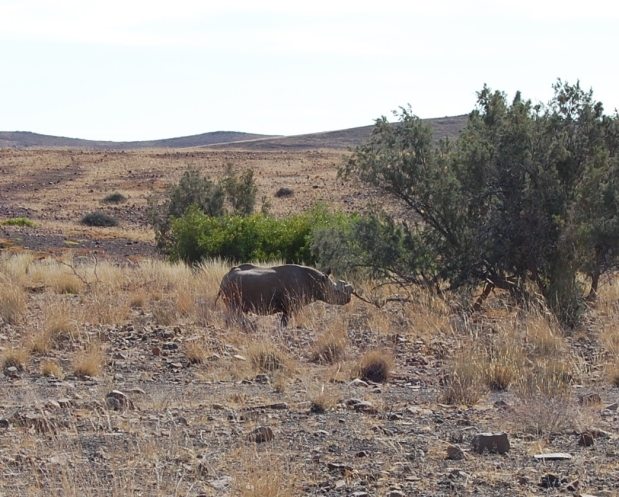 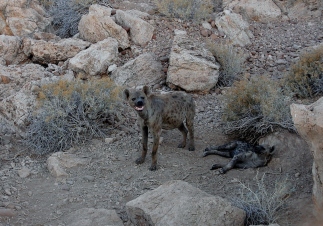 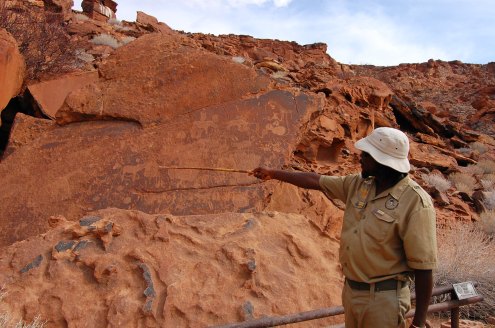 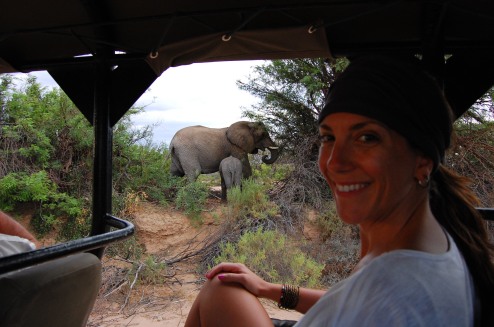 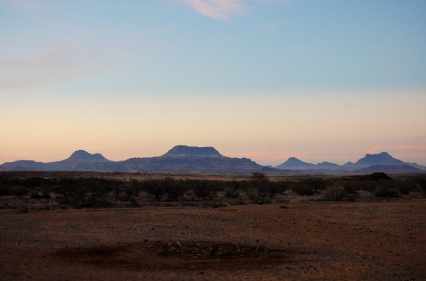 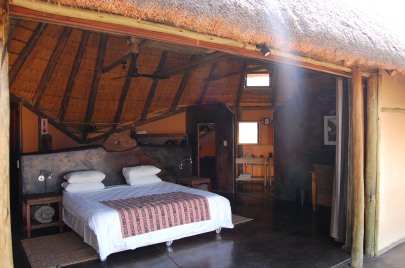 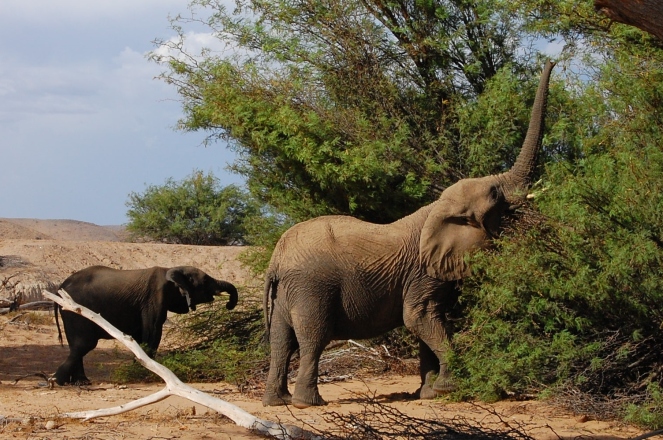